I am a calligrapher-artist and graphic designer. My last employments have been as a European Calligraphy and Drawing teacher at Art School Ginza, Tokyo, and as an English Language ALT at Nippon Institute of Technology, Saitama. I have also worked as a freelance illustrator and graphic designer. I am the translator of the Appendices of "The Lord of the Rings" for the Bulgarian edition of the book. I have been a researcher of J.R.R. Tolkien's works and in 1998 organised the first Tolkien discussion club in Bulgaria.

I lived, studied and worked in Japan in the period 2004 - 2011. I specialised in graphic design and DTP (majored in Media and Communications, Fukuyama University) as well as in Chadõ (Urasenke School of Tea Ceremony, Kyoto), traditional culture, arts and aesthetics. I also have a degree in Japanese Studies (Sofia University "St. Kliment Ohridski"). I have been studying and practising calligraphy since I was fifteen. I have been drawing all my conscious life. English was the fist foreign language I learned, starting at the age of three. Later I added to it Japanese, French and Russian (due to the lack of practice I feel that my speaking level of the latter two has worsened compared to my reading & comprehension level). My native language is Bulgarian. In 2018 I relocated to Ireland.

The Parma Eldaliéva project has been my personal and professional top priority ever since its beginning in 2009. The initial idea of it I conceived almost a decade earlier. The major earthquake in Japan in March 2011 and its consequences for me forced me to unexpectedly relocate back to Bulgaria. After dealing with various personal ramifications in its wake, which forced more than a half-year hiatus on my work on the project, I focused almost solely on Parma Eldaliéva. I continue my work on it in Ireland. 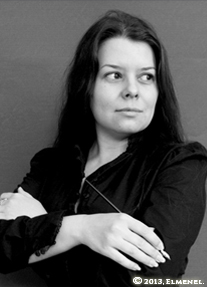